What is the Montessori method?

The Montessori method was developed in the early 1900s by an Italian physician, Maria Montessori. It is a child-focused educational method designed to be in harmony with the child’s natural development through a thoughtfully prepared environment. Maria Montessori believed that each child has great potential and that the work of the child is to create the adult who fulfills this potential.

Did Maria Montessori Approve of Babywearing?

Because Maria Montessori didn’t specifically advise parents to wear their babies, some Montessori followers disapprove of babywearing. While it’s true that babywearing is not explicitly part of her method, she spoke highly of carrying children.

“We must take the child into the world and there he can take in all the impressions he needs…Well into modern times mothers took their children with them everywhere they went, because they breastfed them…All across the globe, children were attached to their mothers in different ways, some slung across their backs, some carried on their hips…Children in this position could see the world as well as the grown-ups…In this way, children get accustomed to their environment, and when they start to walk they are already familiar with it, psychically speaking.” Maria Montessori, 1946 London Lectures

No wonder she was so positive about babywearing. Carrying helps caregivers follow several main principles of the Montessori method. See a collection of Maria Montessori quotes supportive of babywearing here.

Some Montessori followers think that babywearing doesn’t enable independence, which is a very important aspect of the Montessori method. However, it’s important to note that Maria Montessori didn’t force independence on children at all costs. Her method enables independence when children are ready. For a newborn, that might mean being carried quite often. And for a toddler, spending less time in the carrier on a day to day basis, but enjoying most of a spectacular hike from a parent’s back. Finding a balance is key. But it might be reassuring to know that Maria Montessori recognized babywearing as a beneficial practice.

“One observes, too, that the little one, going about with his mother, never cries unless he is ill or hurt in some way. Sometimes he may fall asleep, but he does not cry.” Maria Montessori, The Absorbent Mind 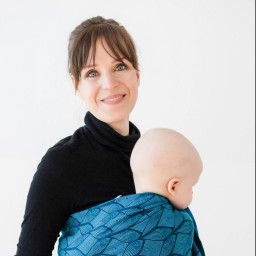 I'm Emma, babywearing enthusiast and educator. I like to take long walks along the lakeside nearby, love strong coffee, dark chocolate and dancing. Carrying my baby has been an absolute lifesaver & wonder for me, and I believe it can be for you as well.  I'm sharing my experience here to make babywearing simple for you. Enter your text here...

How To Pick a Baby Carrier?

7 Essential Tips for Breastfeeding while Babywearing

We use cookies to ensure that we give you the best experience on our website. If you continue to use this site we will assume that you are happy with it.That's ok